Mookee was started in 2008 by Yuske Kamiya. The line is inspired by surf, hip-hop and vintage culture. The unique pieces are created by re-fashioning vintage fabrics and are offered in limited quantities.

More items by Mookee can be purchased via their online shop.

‘Tis the season for giving and receiving, but for us it’s more about giving. Though this season has proven to be harsh and unforgiving we have persevered to bring you guys a bit of holiday relief. Newly available items include 2 fine jersey t-shirt and 1 extra soft ring-spun combed cotton Raglan. Be sure to swing by the Online Shop while supplies last.

Europe’s largest internet convention, LeWeb was highlighted by a keynote interview with fashion icon Karl Lagerfeld where he discussed his daily use of technology and how it enhances his work. Karl also shared a sketch of Steve Jobs that he had done that morning on his iPad, as well as announcing his new online collection (Karl) set to release January 25th 2012. The brand will be sold exclusively through Net-A-Porter with price points starting as low as £150 GBP (approximately $235 USD) for a jacket, Karl will be the first brand to ever release exclusively online.

Lola Dupré is a collage artist and illustrator currently working near Avignon in the south of France. Until November 2011 Lola worked in Glasgow Scotland, at the Chateau studios and then from the Chalet studios.

This quickly reminds you of all the great (and not so great) movies you watched this year. 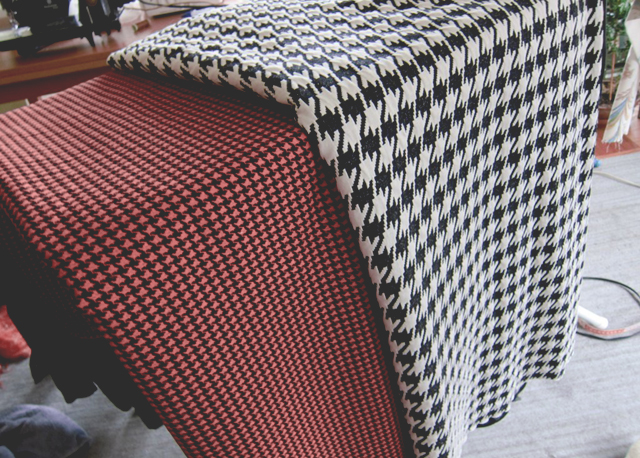 A few hundred years ago, you wore houndstooth to avoid a fight. The pattern—a duotone check characterized by a series of broken squares or abstract, four-pointed shapes—was one of the few not registered as an official clan tartan in Scotland. Wearing someone else’s tartan without permission was more than enough cause for a punch up, so donning houndstooth became the sartorial strategy of choice for nonviolent gents in the Lowlands.

Luckily for them, it wouldn’t have been too tough to find. Because despite its complicated appearance, houndstooth is pretty simple when you get down to the mechanics of things. Many different versions exist, but the most basic is created by weaving alternating groups of four black and four white threads together in a simple 2×2 twill pattern. That signature broken appearance comes from advancing the weave by one thread each row or column, so that edges of each check are staggered. (Think stairs, not walls, for an easy visual analogy.) And though the Scots preferred a version that was woven only from black and white woolen yarns, things have shifted since the birth of the pattern. Now, you can find it in pretty much every sort of material, and color choices abound.

Oh, and a note for the pacifists out there: Ever since the legendary Bear Bryant turned houndstooth into a de facto calling card for rabid Alabama fans, wearing it out of context could be just as dangerous as appropriating another clan’s tartan—at least in Tuscaloosa.

Garmento is a semiannual fashion zine printed and published out of New York. Its focus is on the contemporary and the historical, insisting that the two are one and the same. In the midst of a saturated fashion culture and flagrant consumerism, Garmento ponders beyond it all: what more can there be to clothes? The first issue, “The Americans,” is currently out now.

For Jeremy Lewis, founder and editor of the new biannual zine Garmento, there is no difference between the past and the present. What he means is that if someone is making good clothes, it doesn’t matter if it was seventeen years ago or last month – it’s important, and it should be noted.